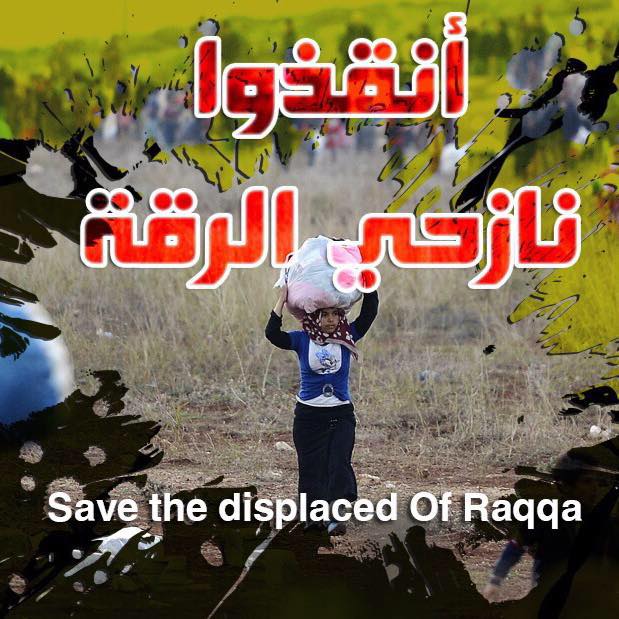 Raqqa province and its inhabitants are witnessing today a genocide plan that is equivalent to the major genocides in history, and perhaps exceeds them, after the province turned into more than an afflicted area, and became a war zone without control, and out of all the generally accepted laws and ethics of war. Residents of Raqqa has turned into a war fuel that no one cares about, and they are leaving from the inferno of “Daesh” to the fire of “QSD”, in a space of an open hell, where there is no end at it’s ends, and there is no candle light to illuminate the tunnel that they are walking in, in an open war from many parties. We appeal to the world and the responsible international organizations, as the north of the province has turned into a concentration camp, like Nazi concentration camps, for the civilians who are fleeing from the inferno of terrorism and bombing, and the mines on their way are more than bread that they can find, they do not enter but under a sergeant eye, and do not go out unless they have a guarantor that is accepted by chauvinist and frantic militias,which were stripped from any conscience or moral.
While we demand international institutions, and appeal to them to stand at their moral and legal obligations, binding to protect the civilians in conditions of war, we emphasize on opening safe corridors and survival ports for fleeing civilians by all means, including using the force for this purpose, and put these shelter camps under international protection and control, and securing the aquired right and freedom for these civilians to reach the shore of safety, and the required limit of urgent humanitarian needs, which put hundreds of families in the abyss of nothingness, and in the way of the hell of death from all sides..
#Save_Displaced_Of_Raqqa